December 2018: Things to Watch in 2019, Updates from Brazil, and the LMS Market in the Middle East

Also, a reminder that we are moving from a late Fall / late Spring reporting schedule to end of year / mid year schedule to enable us to look at a full calendar year of data. You should expect our next report in January to cover full year 2018, and a mid year report in July.

As the year winds down in 2019, we’ve been reflecting on what has turned out to be an eventful year in the LMS market. As we look forward to 2019, we thought it would be useful to identify some of the key trends we’ll be monitoring in the coming year.

Brazil: Bolsonaro’s Election and Implications for the Brazilian LMS Market

In January, Brazil will inaugurate Jair Bolsonaro to a six year term as president. For those who don’t follow Brazilian politics, Bolsonaro’s election capped a contentious campaign (and several years of instability that witnessed the exposure of massive and pervasive corruption, the impeachment of a president, and a crippling recession) that pitted a far right, populist, pro-business candidate with some authoritarian tendencies against Fernando Haddad, a left wing protégé of former president Luiz Inacio Lula da Silva. Lula himself would have ran had he not been in jail for corruption charges. The center largely fell out of play, and many voters faced a choice between two unappealing candidates. In the end, Bolsonaro won handily (55% to 45%) as negative feelings toward the Worker’s Party of Lula and Haddad, and a hope that Bolsonaro might bring more stability and pro-business policies to Brazil, ultimately prevailed.

We are not political analysts, so the relevant question for this newsletter is what does Bolsonaro’s election portend for the LMS market in Brazil? The most likely scenario in the near to medium term is an uptick in activity, with institutions pulling the trigger on LMS evaluations and selections. Here’s the basis of our analysis:

While the factors bulleted above all point to increased activity in the Brazilian LMS market in the next few years, all bets are off if there is a sudden economic downturn or if there is a political crisis that recreates an environment of unpredictability and instability.

Subscribers interested in learning more about the Brazilian and broader Latin American LMS market should revisit our Spring 2018 Latin America Postsecondary LMS Market Dynamics report which can be accesses on the LMS Market Analysis Archive page of our subscriber website.

Overview of the LMS Market in the Middle East

Over the last couple of years we’ve been ramping up our data collection efforts in Asia, Africa, and the Middle East. While there’s more work to be done before we formally expand our coverage, we do have sufficient data to share a preliminary view of the LMS market in the Middle East. For purposes of this analysis, the Middle East includes the following countries: Afghanistan, Bahrain, Egypt, Iran, Iraq, Israel, Jordan, Kuwait, Lebanon, Oman, Qatar, Saudi Arabia, Syria, Turkey, United Arab Emirates, and Yemen. We expect the market share positions to shift as more data is collected, as with other regions, but in broad strokes there is useful initial information to consider. It’s also possible we’ll adjust how to configure newer global regions, i.e. maybe adding in North Africa to the Middle East in an approach similar to that of the World Bank and other international organizations.

The following chart is based on primary institutional adoptions across postsecondary sectors in the region. 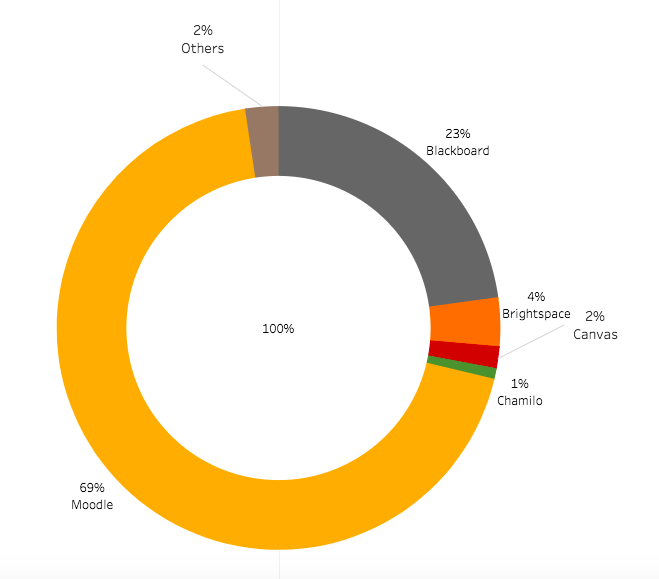 Given what we already know about the international LMS market, it’s not surprising to see that Moodle is a big player with 69% of the market. As reference points, this is comparable with Moodle’s 67% market share in Europe but significantly higher than Moodle’s 25% share in the United States.

Blackboard is quite strong at 23%, largely driven by strong showings in Saudi Arabia and UAE. The remainder of the market is divvied up among the remaining platforms with 5% or lower market share. It’s worth noting that D2L Brightspace is top among the smaller players with 4% share; Canvas is next with 2%, and Chamilo in fifth with 1%. We are also hearing that Schoology is active in the region and getting some traction.

As we deepen our coverage of the LMS market in the Middle East, we expect to be able to provide additional context and insights to understand the current market as well as potential future trends. This initial preview is just that, expect to hear more on the region in 2019.

Thanks for subscribing, and we look forward to sharing more updates in 2019. Remember that we are shifting our next LMS Market Dynamics report to be in January, thus allowing a complete year data analysis.